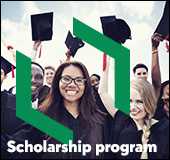 As a caisse member, you can express your point of view by taking part in the Annual General Meeting and elect the people who will represent you on the Board of Directors.

Every year, we invite our members to actively take part in the caisse's democratic life by answering the call for applications to fill openings on the board of directors.

The 2020 call for applications has ended. Thanks to all candidates!

Due to recent developments related to coronavirus (COVID-19), the caisse is postponing its Annual General Meeting to a later date.

In 2017, Caisse de Rivičre-du-Loup paid out $1,300,000 in individual member dividends as well as collective member dividends (donations, sponsorships and scholarships) in the amount of $176,600. Out of this amount, $101,500 came from the Community Development Fund to support growth-generating projects. Caisse members also benefited from 3,540 Desjardins member advantages totalling $174,600.

During the Annual General Meeting, a total of $10,000 was awarded to 15 young caisse members in youth scholarships in the following categories: sports, culture and academic perseverance.

A resolution was adopted to reduce from 14 to 12 the number of officers on the Board of Directors. The following ew officers will soon join the board: Denis Levasseur, director, Jacynthe Roy, director, and Jessica Bélanger and Jean-Michel Mailloux as intern officers. Members also elected to award $100,000 to the Community Development Fund.

The caisse general manager discussed the changes in caisse member behaviour over the last few years as well as what to expect in the future (to 2020), as the top priority is meeting members' changing needs. The caisse chair of the board then showed a video of a surprise reward to Saint-Vincent de Paul volunteers, and the president of the organization thanked caisse members and the community for their generosity when their offices were destroyed by fire in 2017.

Caisse populaire Desjardins de Rivičre-du-Loup is pleased to account for the administration of your financial services cooperative in 2019.

The 2019 annual report contains information about the financial results and activities of your caisse in the past year.